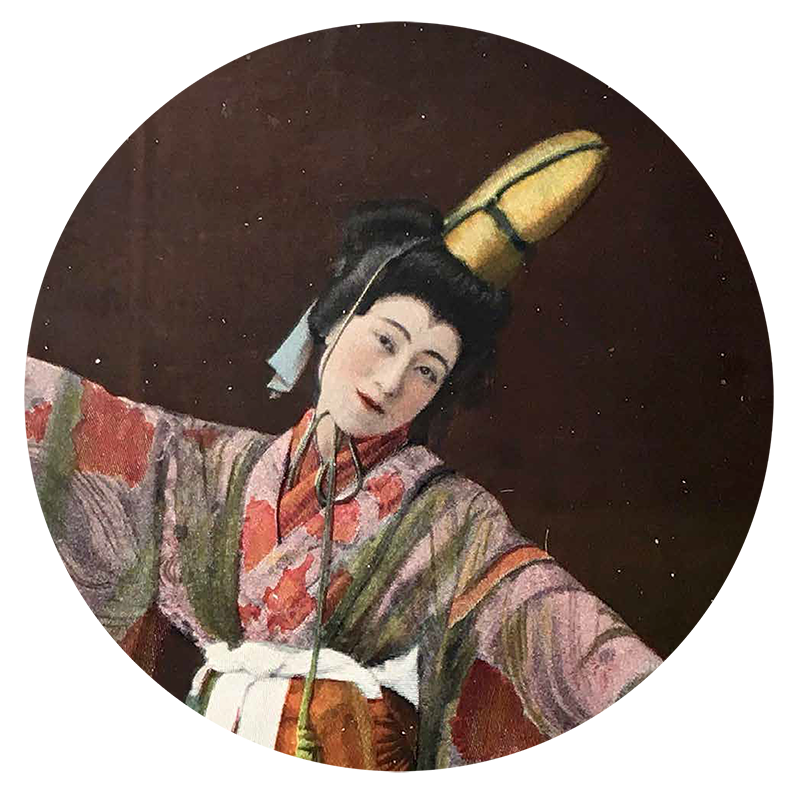 Sada Yacco received her first lessons in dance, music and other arts as a young child. She trained as a geisha in the house of Hamada, whose owner Kamekichi adopted her. With the support of Prime Minister Hirobumi Itô,1 Sada Yacco soon gained a reputation as “Tokyo’s foremost ‘modern’ geisha.”2 Itô introduced her to the actor and playwright Otojiro Kawakami (1864-1911), whom she married in 1894. Two years later, he founded his own European-style theatre in Tokyo, but his attempts at modernisation were met with criticism. The situation was exacerbated by financial failures, which was one of the reasons for his decision to undertake a tour of the West in 1899. Sada Yacco’s position within the all-male ensemble was unique. She evolved her unmistakable style in the course of the year-long American tour. While Kawakami excelled in realistic-looking fight scenes, Sada Yacco captivated audiences with her minimalist gestures and facial expressions. The dances performed in splendid costumes, as well as her death scene in the hit play “The Geisha and the Knight”, were the highlights. In his plays, Kawakami, a pioneer of modern Japanese theatre, combined classical Kabuki with the standards of Western acting practice. Known as soshi shibai, this hybrid form was part of the Shimpa renewal movement that flourished in the late 19th century. Sada Yacco achieved the status of a great tragedienne whom critics compared with Eleonore Duse and Sarah Bernhardt. The acting troupe’s greatest triumphs came with its four-month guest performance in Loie Fuller’s theatre pavilion at the 1900 Paris World’s Fair. Japonisme was in vogue and its influence was especially evident in Art Nouveau. In June 1901, Fuller organised the troupe’s second European tour, in which Isadora Duncan participated for a short time. The troupe performed in Berlin, Dresden, Stuttgart, Munich and other cities. They gave their Munich performances at the Royal Residence Theatre on 28, 29 and 30 January 1902. Giacomo Puccini attended a guest performance in Milan, which was among the sources of inspiration for his opera “Madame Butterfly”. Disagreements between Kawakami and Fuller eventually led to their separation. The Japanese theatrical troupe returned to their homeland on 4 July 1902. Sada Yacco continued to perform in Tokyo, primarily in adaptations of Shakespearean plays directed by her husband. She founded the Imperial Training Institute, the first school for professional actresses, in 1908. After her husband’s death in November 1911, Sada Yacco continued her stage career until 1918. She opened a silk textile company in Nagoya3 and founded a children’s theatre in 1924 in Tokyo, where she returned in 1938. Sada Yacco died at the age of 75 on 7 December 1946. (B.O.)