The Künstlerhaus on Lenbachplatz, which was inaugurated by Prince Regent Luitpold on 29 March 1900, played an important role in Munich’s cultural life. It is linked in a special way to the history of dance modernism. Gabriel von Seidl, the star architect at the time, built it in neo-Renaissance style on the former site of the clubhouse of the Allotria artists’ society. The planning and financing problems for realisation of the building dragged on for years, until finally the “painter prince” Franz von Lenbach took the initiative and brought the project forward. The builder was the Münchener Künstlergenossenschaft königlich priviligiert von 1868 (Munich artists’ society under royal privilege from 1868). As indicated by the self-confident motto “Nobis et Amicis” at the entrance, the magnificent edifice was to be open to all of Munich’s artists and inhabitants as a place for celebrations and meetings.

The interior of the opulently decorated building, which was equipped with every conceivable comfort, burned completely during an air raid in 1944. Rebuilt after the end of the war between 1955 and 1961, the current edifice conveys only a shadow of its former splendour. Paintings by Lenbach and Stuck in the vestibule recall past grandeur, while a bronze relief on the staircase shows the heads and names of the founders: in addition to the architect Seidl and the painters Lenbach, Stuck and Friedrich August von Kaulbach, the bronze relief also commemorates the foundry master Ferdinand von Miller, who was the head of the building commission. The Münchner Künstlerhaus-Stiftung (Munich Artists’ House Foundation), which was established in 2001, strives to continue the tradition and to offer a contemporary artistic and cultural programme.

Lost forever is the magnificent Renaissance-style interior that Lenbach had personally designed, as well as the gable relief by Edwin Weissenfels at the entrance gate on Maxburgstrasse, where three dancing muses wearing gossamer gowns and billowing veils set the mood for visitors. 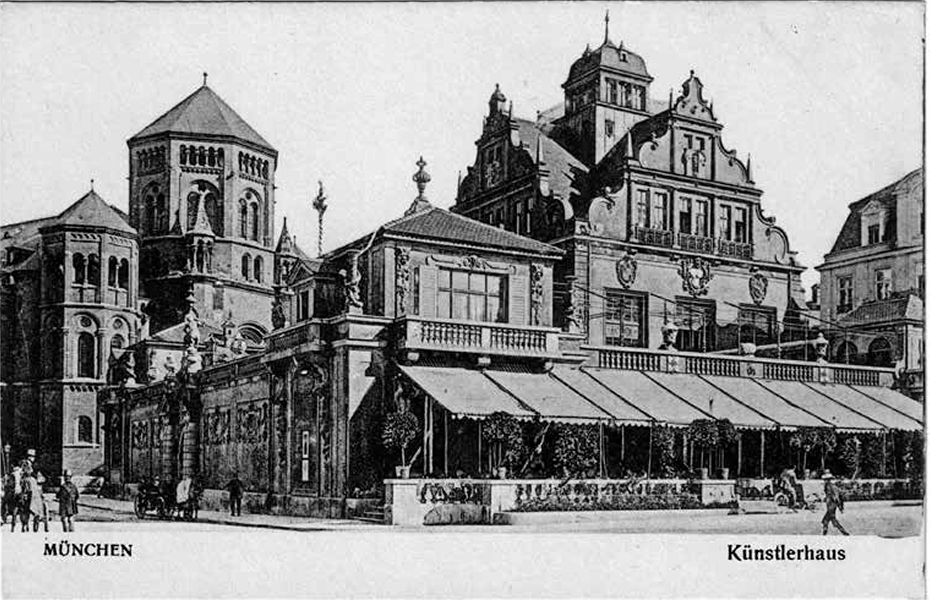 The Künstlerhaus immediately became one of the sights of the royal residential city – in the background on the left is the synagogue, which opened in 1887 and was torn down in 1938. Advertising mark of the adjacent Oberpollinger department store, likewise built by Seidl | © Betz Library

Two years after the grand opening in 1900, the then 25-year-old “barefoot dancer” Isadora Duncan made her spectacular German debut in the Festsaal of the Künstlerhaus. She was very keen to perform at this venue, which she described in her memoirs as the “vital centre of Munich”, and not in one of the renowned variety theatres such as the Deutsches Theater. She tirelessly pursued the goal of establishing free dance as an independent art form in distinction to ballet.

Not all members of the Künstlerhausverein, which acted as tenant and organiser, were eager to invite her to perform in the lavish house. “Lenbach and Kaulbach were in favour, but Stuck felt that a temple of art like Munich’s Künstlerhaus should not be desecrated by dance productions”.1 After all, the mere sight of an unclothed foot was considered obscene and indecent in those days, as was the fact that Duncan danced without a corset and in flowing robes. She finally went to see the painter Franz von Stuck in his artist’s villa, hoping to convince him that her art was “not undignified”. Stuck agreed. For her Munich premiere at the Künstlerhaus on 26 August 1902, she presented her programme Dance Idylls,4 which was based on early Renaissance paintings and ancient motifs. Rather than dancing on a stage or raised platform, she performed in the midst of the hall because she sought proximity with the audience. Critics praised the beauty of her performance. Enthusiastic students unhitched the horses from her carriage and, singing and carrying torches, pulled it to her nearby lodgings at the noble Hotel Bayerischer Hof.

Gabriel von Seidl “praised Miss Duncan’s services to dance” and presented her with a laurel wreath “on behalf of the Association Committee”.6 Soon afterwards (on 15/16 November), the Künstlerhaus again hosted her guest performance, which was extended until 2 December.

Duncan’s performance at the Künstlerhaus opened the venue to free dance. Subsequently, for example, the Munich-based Rita Sacchetto, daughter of the artist Emilio Sacchetto and a favourite of Lenbach, made her debut with her “dance pictures” on 5 November 1905. Duncan’s guest performances had motivated her to become a dancer. She later found a temporary dance partner in Alexander Sacharoff, with whom she performed at the Künstlerhaus in 1912. Else von Carlberg, who was originally from Riga and gave herself the exotic stage name Sent M’ahesa, likewise made her debut at the Künstlerhaus with her “ancient Egyptian dances” in 1909.